Morning Everyone,
Having said I had never made a shaker card before I decided to make one for the Grandon's birthday, albeit a fairly simple one. 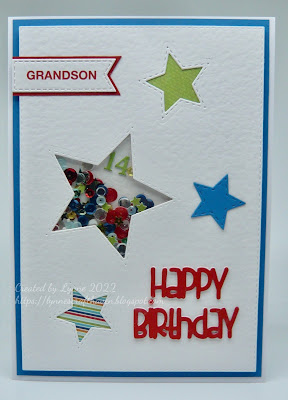 He's in his teens now and only really into gaming but seeing as his previous ones have been on that subject, I decided on something different. I cut 3 star shapes and made the largest one into the shaker part with foam tape, added the sequin mix and also stuck a small 14 in the top of the star.  Snippets of paper were added under the other 2  and a blue star also glued to the card.  The sentiment is a Gummiapan die cut a few times for a bit of depth.
I would like to enter this into:
Allsorts - Birthdays
Snippets Playground - snippets used were the sentiments and papers for the stars.
Penny's Paper-Crafty - Anything Goes
Incy Wincy Designs - Use a die cut or punch
It's a pretty dull day here, but means I can go and finish planting in the garden. I don't like it being too warm for that sort of work.  Whatever you're doing today have a good one and thank you for taking the time to visit.
Lynne x
Posted by Lynne at 09:57:00

Email ThisBlogThis!Share to TwitterShare to FacebookShare to Pinterest
Labels: Birthday

What a super way to add the shaker element Lynn, perfect for Allsorts, thank so much for joining in with our 13th Birthday celebrations.

Absolutely brilliant birthday card for your grandson. Who doesn't love a shaker card?

Fabulous shaker card and love all the stars -been dull here too but at least got two loads of bedding dry!
Carol x

A brilliant shaker card for your Grandson Lynne. I have a Grandson that has a birthday on this Friday. He will be 8 and football mad!! Big hugs, Carol S.xxxx

Shaker cards are my favourite and this is gorgeous. Thank you for joining us at Allsorts this week.
Lorraine

Brilliant card Lynne - AND not an easy shaker element shape either. It's something you really should be so proud of!

A super card for your Grandson, a fabulous shaker design.
Pauline - Crafting with Cotnob
x

Congratulations on completing your first shaker card Lynne. Perfect design for a boy's card. Thank you for entering the Use A Die Cut or Punch Challenge at Incy Wincy Designs.